The continents were formed in the Precambrian period, about 4.5 billion years ago, on tectonic plates, which were initially grouped in an immense territorial mass, the Pangea. The millimetric movement of these earth blocks originated the current continents. It is considered that the Earth has six continents: America, Africa, Asia, Europe, Oceania and Antarctica.

The definition of the term continent is not a consensus among geographers. At least three versions can be considered. The first and most used one considers that there are six continents on the planet – extensive landmasses surrounded by oceans and that shelter several countries. The second considers the existence of only five continents – now considering Antarctica as a non-continent, now considering Europe and Asia as a single continent, Eurasia, because they are located on the same tectonic plate. The third increases the number of continents to eight, considering the subdivisions of the American continent (North, Central and South) as autonomous continents. In this text, we will use the most accepted and usual definition of six continents. 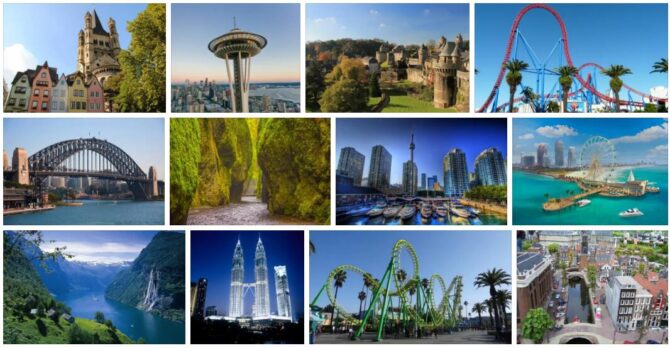 The American continent has the largest latitudinal extension in the world, occupying practically all bands from north to south. This distribution allows the continent to experience all climatic variations on the planet, from the warmest layers in the equatorial region to temperate zones and polar layers. Likewise, the most varied expressions of vegetation, soil and relief are observed.

Its territorial extension is 42,550,000 km², and the population is estimated at 1 billion inhabitants, distributed in 35 countries and 16 territories. Its geographical position completely isolates it from another continent: to the west, by the Pacific Ocean; to the east, by the Atlantic Ocean.

The total GDP of the American continent is estimated at 20.3 trillion dollars. The United States alone accounts for 65% of that amount. The other economically prominent nations on the continent are: Brazil, Argentina, Uruguay, Canada and Mexico.

With regard to the historical and cultural aspects of the American continent, it can be subdivided into two parts: Anglo-Saxon America and Latin America. The first refers to the portion of land occupied by the English and which was constituted as settlement colonies. The second was colonized by Portuguese and Spanish, in its majority, and was constituted as colonies of exploitation. Considering that the root language of the Iberian colonizers is Latin, these countries became known as Latinos.

The European continent consists of 50 countries and 8 territories. Its borders have been changed several times, with the advances and retreats of the empires that conquered it over the centuries. Its borders are: to the north, Arctic Glacial Sea; northwest, Norwegian sea; to the east, the Atlantic Ocean; to the south, the Mediterranean Sea; to the southwest, the Black Sea; and to the northwest, the Ural Mountains.

The population of the European continent is estimated at 743.1 million inhabitants, spread over 10,180,000 km². Its geographical location allows the continent to have different climatic variations: from the severity of the cold climate in the north, close to the Arctic Circle, and milder zones of temperate climate in the south. According to Trackaah, European Union is the largest political and economic organization in the world.

The relief of the European continent is characterized by elevations of plateaus to the south, with the Pyrenees Mountains and the Alps; to the northwest, with the Scandinavian Mountains and, to the northeast, the Ural Mountains. The rest of the territory is made up of plains.

The European continent has the best socioeconomic indicators on the planet. The high collection and concentration of income makes the countries of Europe the object of desire of thousands of migrants. Currently, the continent has experienced the migration of a huge population that is fleeing risky situations in countries in the Middle East and Africa.

The high number of inhabitants of the continent means that social inequalities are extreme. While observing highly developed countries, such as South Korea and Japan, others remain in the lowest income brackets, on the poverty line, such as Nepal and Bangladesh. It should be remembered that in Asia are some of the main oil producers in the world, such as Iran and Afghanistan. In addition, there are countries that have an extensive industrial park, such as China and India.

Among the physical aspects of the Asian continent, it is possible to point out: in the south, there are the plateaus, as well as in the central-west portion of the continent; to the north and northwest, plains predominate. Asia still has some inland seas, such as the Caspian Sea, Aral Sea and Black Sea.

The climatic part of the Asian continent is also quite diverse due to its longitudinal and latitudinal extension. Thus, it is observed in the portions of lower latitudes hot climates – equatorial, humid and desert tropical – and, in the zones of greater latitudes, colder climates, such as continental and polar.

The continent Africa has 54 countries and 9 territories. Its territorial extension is 30,370,000 km², and its population is estimated at 1,216,000 million inhabitants. With an extensive latitudinal distribution, the continent occupies part of the northern hemisphere and part of the southern hemisphere, being practically cut in half by the equator. Thus, only the northern and southern ends escape the tropical zone, being located in the temperate zone.

Historically, the continent has been characterized by a set of conquests, cultural impositions, colonizations and exploitation. Over the centuries, several countries, especially European ones, have claimed part of the African territory, as well as its wealth and its population. For centuries, the European continent has benefited from natural and human resources from Africa.

Despite a crystallized image of a poor continent, Africa has important regional economic powers, such as Egypt, South Africa and Nigeria. Algeria, Angola and Libya stand out as major oil producers. In the vast territory of the African continent, there are still varied reserves of mineral resources, such as diamond (Botswana, Congo and Angola) and gold (Ghana, South Africa and Sudan).

The warm climate and savanna vegetation are characteristic of the African continent, which still has extensive deserts, such as the Sahara and Kalarari. Most of the continent’s relief is formed by plateaus and depressions – these accompany the main watercourses of the continent: Nile, Congo, Chad and Niger.

The Oceania is the smallest continent on the planet, with 8 526 000 km². Its territorial extension is practically confused with the territory of Australia, of 7,692,000 km², that is, a little more than 90% of the continent. Thus, some authors classify Australia as a continental country. The remaining territory is distributed between 14 micro countries and 11 territories.

Oceania’s population is estimated at 21,292,893 inhabitants. Australia accounts for 60% of that amount. Papua New Guinea (6.7 million people) and New Zealand (4.2 million) are the other populous nations in Oceania.

The micro countries that make up Oceania, like Australia, are islands that spread across the Pacific Ocean. They are classified in Melanesia, Micronesia and Polynesia.

The Antarctic or Antarctica, is the latest to be explored and little is known about its main features, fauna and flora. Its territorial dimension is estimated at 14,000,000 km². Its population is basically characterized by researchers, who take turns in the intention of carrying out research and scientific work under extreme conditions.

Currently, 29 research bases from different countries exist in the Antarctic territory. The Brazilian base in Antarctica is called Ferraz de Vasconcelos and was installed in 1984.

By an international convention, it was defined that the Antarctic territory does not belong to any country, and cannot be claimed or invaded under any pretext. Known as the Antarctic Treaty, it was signed on December 1, 1959.

Antarctica is the coldest and driest continent in the world. Its temperatures can reach -89ºC, and its average precipitation is extremely low, around 30 mm to 70 mm. In this way, it can be said that the continent is an immense cold desert.

The 50 countries with the lowest inflation rate on earth