Greek art, in the narrower sense the art of the Greeks from around the 11th to the 1st century BC. Chr.

The geometric art (.. Approximately 1000-700 BC) is the first independent Greek art; It got its name from the geometric ornaments with which the vessels were decorated.

In the Archaic period (archaic, 7./6. Century), the first temple, the Doric and Ionic temples were built (also Column), the first monumental statues.

The classical period (5th / 4th century) represents the high point of Greek art. She saw in the ideal human image (a beautiful body, ruled by a clear, alert mind) the measure of all things. So the proportions of the temple correspond to the human figure, so the vase body with foot, belly, shoulder, neck is structured according to the human body.

In the early classical art (also called strict style) the simple, simple, organic is emphasized. The main work of this style is the Temple of Zeus at Olympia with its marble sculptures; Some original bronze works from this period have also been preserved, including the charioteer of Delphi.

In high classical art , the Parthenon, the Propylaea, the Temple of Nikes and the Erechtheion on the Acropolis of Athens were created under the direction of Phidias, who also created famous sculptures.

In late classical art , large temples were built, as well as theaters and magnificent tombs. The most important sculptor of this time was Praxiteles. The severity and dignity of the high-class are softened.

In Hellenistic art (around 3rd – 1st century BC) realistic features mix with passionate movement (including Pergamon Altar, Laocoon group). In architecture, the dimensions were increased to gigantic proportions: castle, town and market complexes, libraries and grammar schools (including in Pergamon, Alexandria and Ephesus).

The beginning of the 20th century was marked by a phase of intense efforts to create a national art. Influences of the European avant-garde, especially (late) impressionism and expressionism, were taken up by the artists working abroad (Giorgos Bouzianis, * 1888, † 1959), but their work met with rejection in their own country for a long time. From the 1960s onwards, Greek artists increasingly sought connection with international trends (geometric abstraction, abstract expressionism, op art, kinetic art, arte povera). Costas Tsoclis (* 1930) made important contributions to the art of the 1950s to 1980s, among others. in Rome, Paris and Berlin, Konstantin Xenakis (* 1931) and Takis in France, I. Kounellis in Italy and Chryssa and L. Samaras in the USA. Among the architects were Dimitris A. Pikonis (* 1887, † 1968), Aris Konstantinidis (* 1913, † 1993), Dimitris Antonakis (* 1933), Suzana M. Antonakis (* 1935) and Alexandros N. Tombazis (* 1939).

A young, cosmopolitan art scene has been established since the 1990s, which is characterized by its detachment from traditional visual rhetoric and closer ties to international developments (particularly evident from the variety of genres and themes in recent modern Greek art). These include, among others. Zaphos Xagoraris (* 1963) with works of object art, installations and environments, Lina Theodorou (* 1970) and Maria Papadimitriou (* 1957) with video works and photographs mainly of social and political content, the media artists Nikos Charalambidis (* 1967) and Sia Kyriakakos (* 1968) who follow an interdisciplinary approach and are particularly known for their ironic handling of their own cultural heritage, as well as the artists Dimitris Tsoublekas (* 1967) and Panos Kokkinias (* 1965), who became famous for their photographic work. 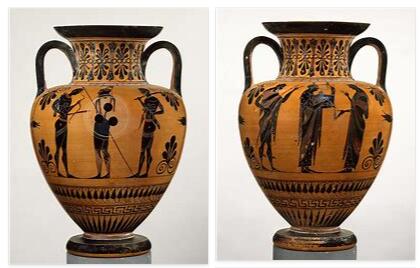