According to growtheology, Idaho is a state of great natural beauty with huge mountains, dense forests, wildlife, secret valleys and large lakes. Idaho is one of the five states of the Great American West region.

Idaho is one of the states of the United States. The nickname for the state is the ‘Gem State’. The capital is Boise.

History
The area that is now called Idaho was originally populated by Native American tribes such as the Nez Perce. There are still a few reservations in the state. Idaho was one of the last areas of today’s contiguous United States to be explored by Europeans. The first official exploration dates back to 1805-1806, when the Lewis and Clark expedition crossed Idaho on its way to the Pacific Ocean. They came from present-day Montana and crossed the current border at 2,247-foot Lemhi Pass. The first city in Idaho was Franklin, founded by Mormons in 1860, who believed they were still in the Utah Territory. From 1860 there were also some “Gold Rush”s in Idaho, which resulted in settlements in Idaho around gold mines. On March 4, 1863, President Abraham Lincoln signed into law creating the Idaho Territory. This territory included present-day Idaho, as well as the present-day states of Montana and Wyoming. In the same year, the city of Boise was founded, the current capital. A year later, present-day Montana and Wyoming were already split off, giving Idaho its current borders. In 1869 the first transcontinental railway was completed, bringing many people to the region. The railroad passed just south of the southern border of present-day Idaho, north of the Great Salt Lake. On July 3, 1890, President Benjamin Harrison signed into law the law formally making Idaho, the 43rd, a state of the United States.

Geography
Idaho borders Canada to the north, Washington and Oregon to the west, Montana and Wyoming to the east, and Nevada and Utah to the south. The main river is the Snake River, which forms part of the border with Washington and Oregon. The largest lakes are Lake Coeur d’Alene, Lake Pend Oreille, Bear Lake, and the American Falls Reservoir.

Much of mountainous Idaho is taken up by the Rocky Mountains, the highest point of which is Borah Peak (3861 meters). The state is rich in lava from Craters of the Moon, the Hells Canyon, which is deeper than the Grand Canyon and the Balanced Rock.

The official nickname of the state, the Gem State, refers to the presence of many gemstones and natural beauty.

Boise
Boise is located at the base of the Rocky Mountains. Boise is the quiet capital of the state of Idaho and a lot of agriculture is done here. Boise is the perfect place for adventure tours through the pristine nature in the area. Boise owes its name to the many trees, bois in French, that grow on the river of the same name. The city is well worth a visit, the inhabitants are very relaxed and there are many bars and restaurants.

Craters of the Moon
Craters of the Moon is a National Monument, but nevertheless very large. The monument consists mainly of lava fields and steppes with sagebrush. The lava from the lava fields mainly came from The Great Rift: a fissure/crack in the earth’s crust with a length of 85 kilometers. There are also many cone volcanoes in the park. NASA trained astronauts here for a long time. because it was thought that the lunar landscape would look something like this. However, this turned out not to be the case.

Hell’s Canyon
Hells Canyon is a deep canyon of 16 kilometers wide and 2412 meters deep. Hells Canyon is even deeper than the Grand Canyon in Arizona. It is fun to sail through the gorge with a jet boat, such a trip is very spectacular! Hells Canyon is located along the border with Western Idaho. It is part of the Hells Canyon National Recreation Area.

Coeur d’Alene
Coeur d’Alene, nicknamed ‘Lake City’, is located in northern Idaho and is surrounded by dozens of ice age lakes. The lake of the same name is the most popular attraction. You can row, canoe, kayak, raft, jet and water ski, and of course fish and swim. 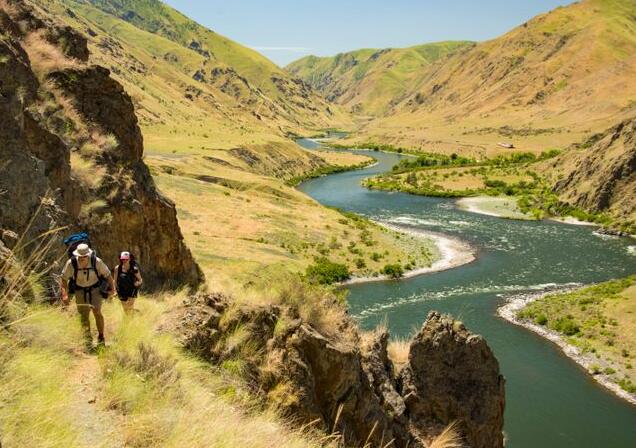