The housing market in Kosovo and particularly in Prishtina is very vital. There is a wide range of options available for both short and long-term stays. Simple accommodations (individual rooms for 150 euros per month) can be rented as well as entire villas for several thousand euros per month. On the outskirts of the city is the international village, a “gated community” for expats.

The supply situation with everyday goods is good, even if compromises have to be made when it comes to the variety and especially the quality. In Prishtina, as well as in the other larger cities and on the main traffic routes, there are a large number of large supermarkets and shopping centers with a wide range. Almost on every corner there is a small kiosk with a basic set of groceries and everyday items. The supply of organic food has so far been patchy, with an organic shop recently opening in Dragodan (next to the Austrian embassy). The density of restaurants is particularly high in Prishtina and the offer is very good in terms of quality and price. The cost of living in Prishtina and in Kosovo are low, from a German perspective.

Goods and services that cannot be obtained in Kosovo can usually be bought in neighboring Macedonia. In Skopje, 90km away from Prishtin, the consumer will find z. B. several branches of a German drugstore chain, a sushi restaurant etc.

The same applies to looking for an apartment when you need everyday goods and services: ask friends, neighbors or work colleagues!

The opening times of state institutions and authorities are from 8 a.m. to 4 p.m., with mostly no services being offered during the lunch break from 12 p.m. to 1 p.m. There are no statutory shop opening hours, so that many shops (especially supermarkets and kiosks) are open late into the evening and also on Sundays. Many retailers, however, close in the evenings and on Sundays. 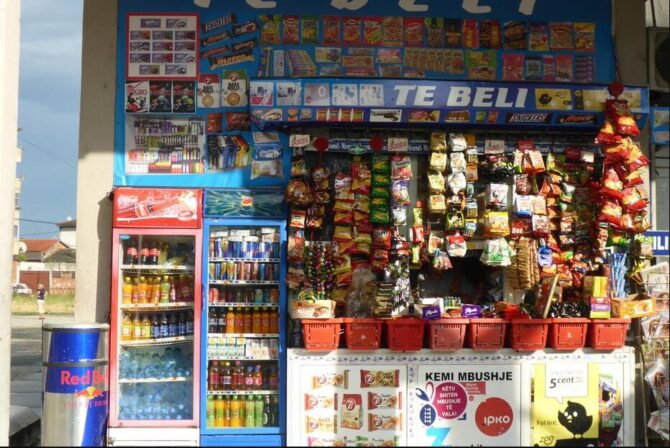 The official currency in Kosovo is the euro. In the predominantly Serbian communities, especially in the north of Kosovo, the Serbian dinar is also in circulation.

The use of credit cards has so far been limited to larger cities and / or shops or restaurants, with their acceptance currently increasing rapidly. Visa and MasterCard are accepted more often than American Express or Diners Club. The money supply via ec / Maestro card is now also guaranteed outside of the big cities. However, the ATMs of Kosovar banks do not accept all German EC / Maestro cards. But especially when traveling or on excursions in the country, you should have a sufficient amount of cash with you. In payment transactions It is important to ensure that, especially in smaller shops or e.g. B. Often only a small amount of change is available in public transport and paying with 50 euro bills can be problematic. The use of travelers checks is uncommon.

The Kosovar constitution defines Kosovo as a secular state. The vast majority (over 95%) of the Kosovar population (Albanians, Gorani, Turks, Bosniaks and some Roma, Egyptians and Ashkali) profess the Sunni Islamic faith. In addition to the Islamic community, there are dervish orders, of which the Bektashi order is the most widespread. An estimated 2% of the Albanian Kosovars profess the Roman Catholic faith. The Catholic community is concentrated in the larger cities of Djakova, Peja and Prizren and has recently seen increasing popularity. The overwhelming majority of the Serbian population belongs to the Serbian Orthodox Churchat. Kosovo is home to some of the most important churches and monasteries of the Serbian Orthodox Church, such as the Archbishopric of the Patriarchate of Peć and the Visoki Dečani and Gračanica monasteries, which are world heritage sites. In the 2004 riots, Serbian Orthodox churches and monasteries were destroyed, including the Archangel monastery near Prizren. Ethnicity of the Kosovar Albanians is traditionally defined by language and not by belonging to a specific religion. The principle of secularism is shared by the majority of the population. The tendencies towards a radicalizing Islam, as known from Bosnia and Herzegovina, have so far been a rather manageable phenomenon. However, the so-called Islamic State (IS)his recruiting attempts directly to Muslims in the region, among others. Combating (religious) extremism has become one of the priorities of the Kosovo government.

The Kosovar constitution guarantees freedom of religion, and as a result of the integration of the Ahtisaari plan into the constitutional order, 24 protection zones have been set up to protect religious and cultural sites, especially the Serbian Orthodox Church. Like the US State Department’s latest 2019 Religious Freedom Report. However, there are still practical and legal restrictions on the full implementation of religious freedom. There is no legal basis for religious communities that have so far not had the legal status to obtain it. A corresponding addition to the law on religious freedom, which was introduced into parliament in 2017, was never passed. As a result, communities such as the Evangelical Protestant Church of Kosovo remain legally discriminated against in terms of tax breaks or access to communal cemeteries. With regard to the Serbian Orthodox Church, the status of the protection zones is sometimes disregarded by local and central authorities. For example, the implementation of a ruling by the Constitutional Court from 2016 confirming that the Visoki Dečani Monastery owns 59 hectares of land, to this day refused by the Dečani municipality. At the same time, there are regular break-ins into Orthodox churches and the devastation of cemeteries, whereby the motives of the perpetrators can hardly be separated from religion and ethnicity (Serbs).