The Old Town is the heart of Prague, and the most familiar of the city’s areas. 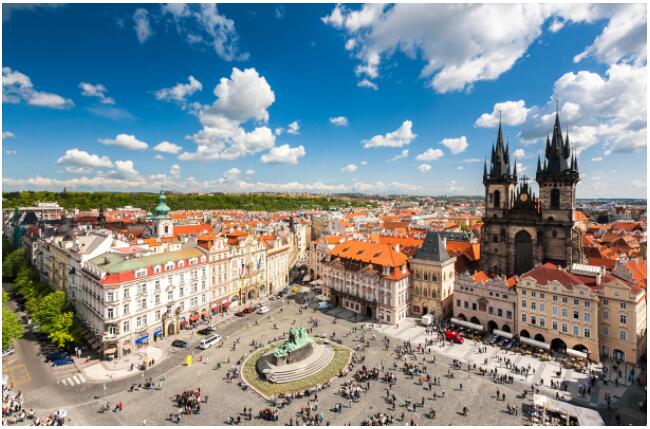 The Old Town Square is the heart of Prague

The square of Prague’s Old Town is a great reflection of the diversity of Prague’s architecture. At the edge of the square are buildings representing different styles from Gothic and Baroque to Art Nouveau.

The landmark of the Old Town is the 14th-century town hall, which was blown up by the Germans in the eastern wing at the end of World War II. The destroyed parts of the building have not been repaired, and a large part of the town hall is obviously missing. The 27 white crosses in front of the town hall are reminiscent of the execution of 27 nobles in the 17th century.

In addition to the town hall, the square’s attractions include the Tyn Mary’s Church and the statue of the Reformer Jan Hus. However, perhaps the most famous attraction in the square is the astronomical clock, which marches out twelve apostolic dolls from its cuckoo-shaped hatches every hour. The name of the clock derives from the fact that it displays not only time but also numerous astronomical values, such as the positions of the sun and moon.

One of Prague’s best-known and most popular attractions is the 14th-century Charles Bridge, populated from morning to night by avid tourists. The bridge is built of 16 arches and is for pedestrian use only. The 516-meter-long Charles Bridge represents Gothic architecture.

Charles Bridge is especially known for the statues of saints that adorn the bridge. There are a total of 30 statues. It is believed that touching the statue of St. John brings good luck and ensures that the toucher still returns to Prague. The best time to visit Charles Bridge is at sunrise or sunset, when there are fewer tourists and Prague bathes wonderfully in the sunlight. There are towers at both ends of Charles Bridge that you can climb to look out over the center of Prague.

The city of Prague originated from the Royal Palace in Prague. Prague Castle is a huge area filled with various attractions and is located in the Hradčany district. Probably the most famous attraction in the castle area is the impressive St. Vitus Cathedral, one of the most famous symbols of Prague and the most significant church in the Czech Republic. Kings and clergymen from many different eras have been buried in the cathedral and the crypt below it. The specialty of the cathedral is that the crown jewels of Bohemia are preserved there.

In addition to St. Vitus Cathedral, the Prague Castle area is home to several palaces, galleries and museums, a monastery, observation towers, St. George’s Basilica and a lovely Golden Alley with small pastel-colored houses dotted side by side.

The Jewish community in Prague was one of the oldest and strongest in Europe before the devastation of World War II. The Jewish neighborhoods stand out from Prague’s Old Town as their own area, Josefov. The first mention of the area is known as early as the 9th century, and Josefov’s first synagogue was built in the 12th century. In the 19th century, the Josefov area was renovated according to the Art Nouveau town plan.

The Jewish community in Prague was almost completely destroyed in World War II, but signs of the region’s long Jewish history can still be seen. There are several synagogues in Josefov and the largest and best-preserved Jewish cemetery in Europe, which has existed since at least the 15th century. Josefov can also visit the author Franz Kafka in Prague. Kafka lived almost all his life in Prague. Kafka is buried in a new Jewish cemetery. 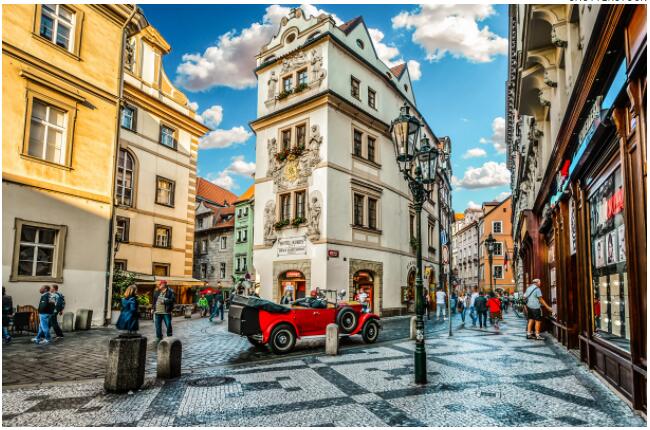 The Malá Strana or “small side” district is the best preserved Prague in terms of architecture. The town plan of the area dates back to the 13th century, and the district is the second oldest in Prague.

Of course, Malá Strana has architecture from more recent times, and Baroque buildings in particular are well represented. In addition, there are many magnificent noble palaces and gardens in the area, as well as atmospheric beer houses typical of Prague.

The most famous of the individual attractions are the Church of St. Nicholas, one of the finest Baroque churches in Europe, the Church of the Virgin Mary, the Wallenstein Palace with its gardens and the wall of John Lennon near Charles Bridge, painted entirely with inscriptions and images dedicated to the Beatles legend.

The name of the district, Nové Mesto, or “new city”, is misleading: the area was born as early as the 14th century as a district of workers and monks who flowed into Prague. Today, Nové Mesto has a reputation, especially beer hall-area, as part of the city can be found, among other things, the world’s oldest brewery restaurant U Fleku, which has a half-block size.

Highlights of Nové Mesto include the Obecni Dum, considered the most important Art Nouveau building in the Czech Republic, Wenceslas Square, often described as Prague’s Champs Elysées, the Church of the Snowy Virgin Mary, and Charles Square, a 520-meter green park square in the heart of the district.