North America is the third largest continent on earth and part of the double continent America. As a cultural earth part of North America, it encompasses the territories of the USA and Canada. The continent’s natural space is formed by four large landscapes: the Canadian Shield in the north, the North American Cordilleras with the Rocky Mountains as central parts in the west, the Appalachian Mountains in the east and the Inner Plains with the central and the Mississippi lowlands in the center between the Cordilleras and Appalachians the Great Plains. North America has a share in all major climates. The already great climatic contrasts are reinforced by the special features of the relief and the effects of ocean currents. The natives of North America were exterminated or displaced by European immigrants, whose descendants now make up the majority of the population.

North America is almost twice the size of Europe (Figures 1 and 2). In addition to the mainland with the islands off the north of the Arctic archipelago of Canada and the island of Greenland, it covers a total of 21.5 million km². North America is connected to South America via the Central American land bridge and forms the double continent of America with this subcontinent.

The exact demarcation of the continent is not easy.
According to essential geographical features, the continent comprises the entire mainland between the Arctic Ocean in the north and the isthmus of Panama, the southernmost point of the Central American land bridge, in the south.

In many cases, however, the land bridge between North and South America is separated from the network with North America and referred to as Central America.

Sometimes the southern border of North America is drawn across Mexico, in the area of the Isthmus of Tuhantepec on the Central American land bridge, and Mexico is divided.

Because it is more contradictory overall, the delimitation by cultural earth has prevailed. A distinction is then made between Anglo America and Latin America.

Anglo America then only includes the English-speaking countries Canada and the USA and ends in the south on the Mexican border.

Latin America includes Mexico and all other countries in Central and Southern America in which Spanish or Portuguese (Brazil) is spoken.

Within these limits, the continent of North and Anglo America extends from the Arctic Islands in the north over 6500 km to the Gulf of Mexico in the south and at the height of the island of Newfoundland over 5500 km from west to east.

The largest river in North America with a length of 3778 km is the Mississippi, which has a catchment area of 3.2 million km² with Missouri and Ohio. It drains about 15% of the continent’s area towards the Gulf of Mexico. It is followed in the west of the continent by the Columbia and Colorado rivers that flow into the Pacific. There are many reservoirs on both streams that are used for energy generation and water supply; the largest in the east are the Canadian Mackenzie, which flows into the Arctic Ocean, and the St. Lawrence River, the outflow of the Great Lakes into the Atlantic Rivers of North America. The five great lakes (Upper Lake, Michigan, Huron, Erie and Ontario) on the border between the USA and Canada together have an area of 250,000 km². This makes them the largest contiguous freshwater surface on earth.

The diversity of the climatic conditions also corresponds to the diversity of the natural vegetation of the North American continent. The northern areas of Alaska and Canada are occupied by tundra. The almost treeless, species-poor vegetation of the tundra consists of dwarf shrubs, grasses, lichens and mosses. To the south is a belt of boreal coniferous forests, which covers large parts of Alaska and Canada with a width of around 1000 km.

Pure spruce forests mostly grow in the northern regions, while the proportion of firs increases towards the south. Further south, in the USA, the vegetation changes more in an east-west direction.

In the relatively rainy east, deciduous and mixed forests originally grew,in Florida and the Gulf of Mexico subtropical wet forests. However, the forest share has declined sharply due to clearing. To the west, the prairies of the Inner Plains adjoin the deciduous and mixed forest region. The eastern parts of the steppe-like grasslands were largely converted into arable land. Beyond the dry limit, they are mainly used as pastures for cattle. In the North American Cordillera in the west of the continent, coniferous forests thrive in the higher mountain regions, in which blue spruce, douglas pine, white spruce and cedar dominate. Sequoia trees are also growing in the Sierra Nevada and are one of the tallest on earth with a height of up to 135 m. Most of the low-precipitation basins and plateaus between the mountain ranges are located Semi-deserts and deserts. Special features of the vegetation are large cacti, u. a. the organ pipe cactus up to 7 m high. Evergreen hardy plants thrive in the mild subtropical climate in the California valley between Sierra Nevada and the coastal mountains. The natural vegetation of this area is comparable to the Mediterranean vegetation in Europe. Fertile soils and favorable climatic conditions have favored the emergence of the “Garden of America”, the most important fruit and vegetable growing area in the USA.

According to Countryaah, the current population of North America is 579 million. The original population, Native Americans and Inuit, were largely exterminated by European conquerors and settlers or perished from introduced diseases. Some of the indigenous people mingled with the immigrants, in the south and east of the continent and with the blacks abducted as slaves.

However, the majority of the population consists of the descendants of immigrant Europeans, who mainly speak English and French (in parts of Canada). The average population density in North America is very low compared to the western European industrialized countries. There is also a very uneven distribution of the population. Largely deserted areas, such as the tundra and huge forest areas in the north of the continent, contrast with the extremely densely populated metropolitan areas in the eastern United States or Canada. 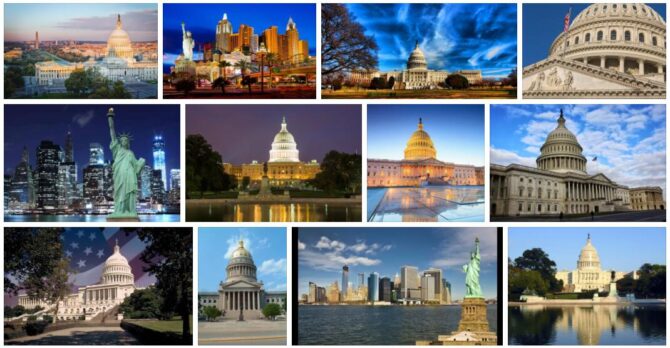